This article covers creative of George A. Romero, about his atmospheric film, and my little tribute to remember about him.


One day I burned with desire to create some comics about Day of Dead. I have to watched this film again, and you will see what I has in final...

Each river has a beginning, and the story of creative has a beginning too. The third day I saw a video Dying Light Tribute to The Master and known about George A. Romero's dead. That moment I wanted to create original comics looks like a Day of the Dead and my own project Rules of zombie apocalypse.

Plot
So, firstly of all, if you never saw Day of the Dead (filmed in 1985), you should read a description:

Zombies have overrun the entire world, outnumbering humans 400,000 to 1. The remaining live humans live in barricaded camps and secure underground bunkers. In an underground facility in the Everglades that houses scientists and soldiers, the scientists are trying to find a solution to the zombie pandemic, in exchange for the soldiers to protect them and to facilitate their work. Dr. Sarah Bowman, her boyfriend Private Miguel Salazar, radio operator Bill McDermott, and helicopter pilot John fly from their underground base to Fort Myers, Florida, in an attempt to locate additional survivors. They encounter a large horde of the undead and return to their army base.

Dr. Logan, the lead scientist - also known as "Frankenstein" due to his grisly surgical dissections of zombies - believes that the zombies can be trained to become docile, and accordingly has amassed a collection of test subjects, which are kept in a large underground corral in the compound, in spite of the objections of Captain Rhodes. The tension between soldiers and scientists worsens in the face of dwindling supplies, loss of communication with other survivors, and slow progress in research.

That is a backbone of script. My objective was a changing of elements in scene and comparing some actions. So Dr. Logan wants to secure Rhodes' cooperation by showing him the results of his research. He is especially proud of "Bub", a docile zombie who remembers some parts of his past life and engages in rudimentary human behavior: listening to music, using a smartphone, saluting Captain Rhodes and even repeating a string of garbled words. What happened you will see below.

Procces
Secondly, as any work need a preparing, and creative of comics need too. Took a film and cut many frames. 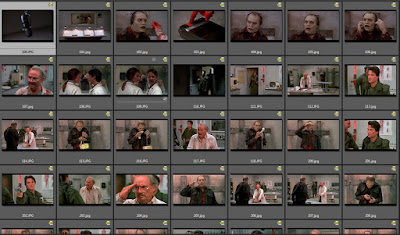 I had a hundred variants of position all frames, but I have to choose just one's. As a rule, I did on piece of sheet. 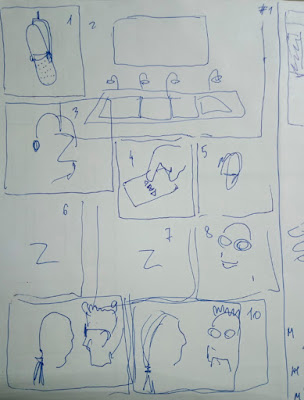 The film took place in 1985, and actors used weapon and equipments from 80's. My way - take some items from our time: modern smartphone, adult toy, spinner. 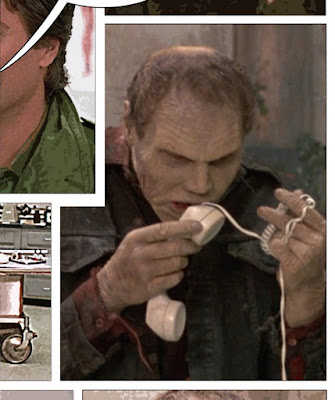 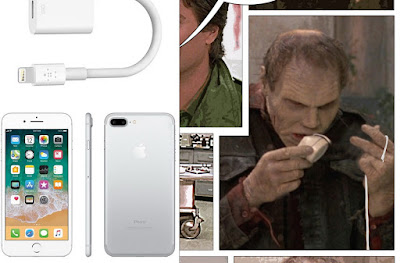 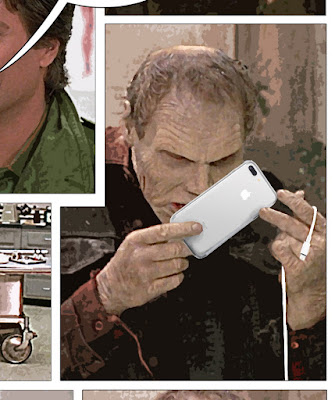 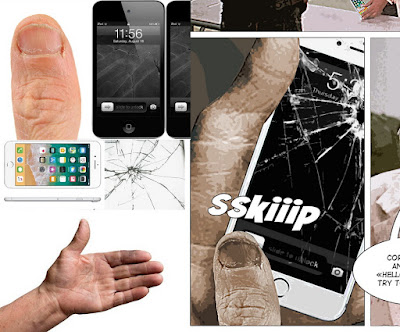 Final work - it work around talking between characters, sounds of surroundings and actions, their positions and scales. 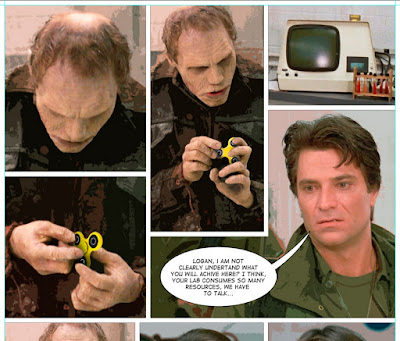 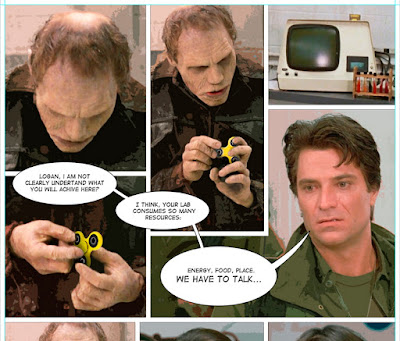 Searching of music
About music track, yes it's important, because in story scientifics used a hypnotize music or some else in these researches. I chosed  from many tracks: Russian, Ukrainian, and American. I selected some interesting for me, the music witch I want turn off:

First of them I used in russian version comics, and last from list I used in english version, because JP Cooper's song has simple text, what I needed.

Results
I have to say something, if you want to share, please, use a special buttons at the top of the page. If you want, to post and use some element, please write a sourse site. Thank you, comrads. 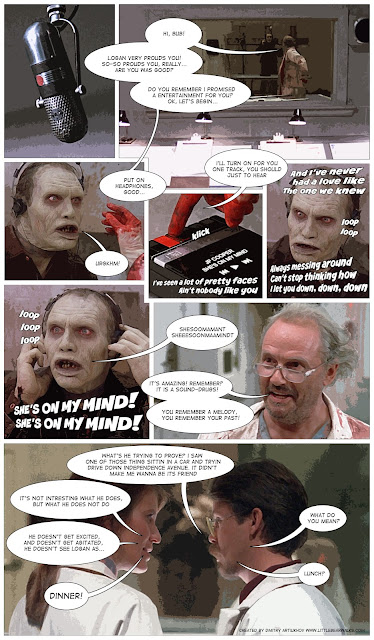 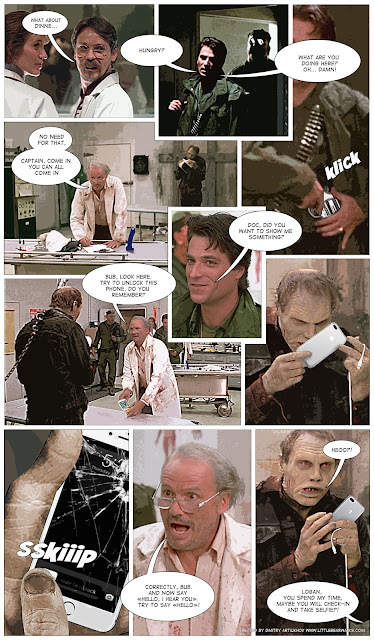 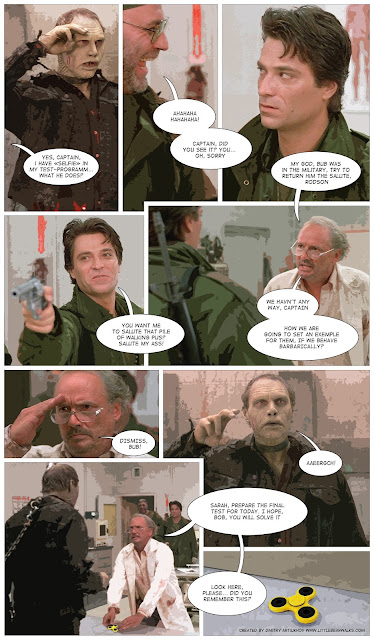 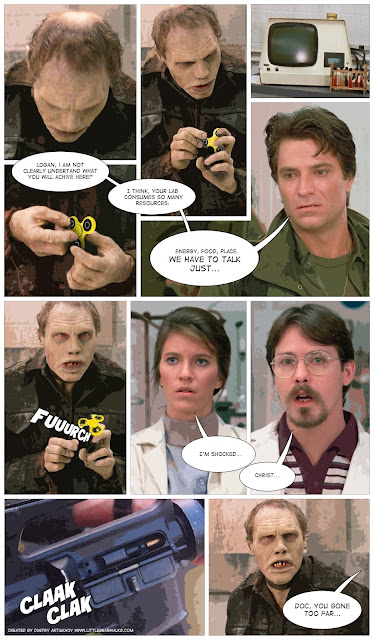 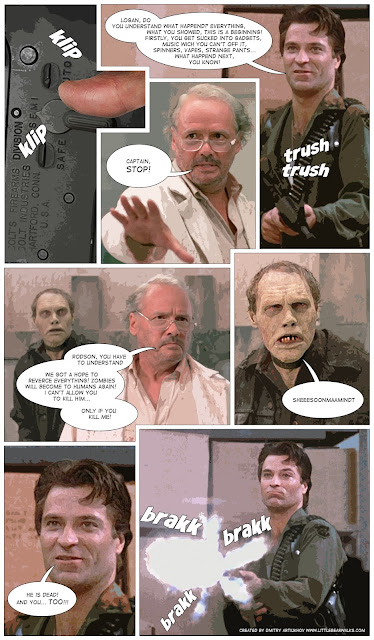